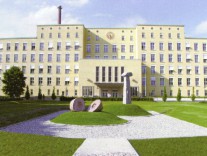 The Klinikum was opened in 1931 as the municipal hospital of Fürth.

In Fürth’s Hospital an exhibition was opened with paintings by 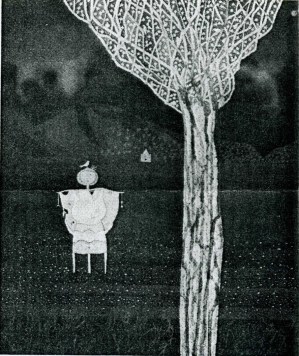 "Each of us has a prism through which we perceive the world; lucky, who recognises with it cheerful colours and funny things." A quote by the famous French writer Gustave Flaubert, by the painter Roland Fürstenhöfer encrypted into a "bottle-wisdom". With a well-attended private view an exhibition of his works was opened at the Klinikum in Fürth.

The pictures by Fürstenhöfer, who was born in Fürth, are telling stories that never end and more than once gets one that impression of looking deeply in his mind. Fürstenhöfer "refers to the cosmic thinking," explained the poet Magdalena Gmehling in her introduction and is emphasising the paradoxical tension between quiet points and the circling world in his works. "Consciousness and the unconscious have conflated into one unit".

Like a golden thread impressions of countless trips are running through titles and content of images. Somewhere between China, the deserts of Egypt, American Indian culture and Heideck - his home - the 45-year-old one's soul and imagination is floating. The symbolic and the bizarre often appears: So one finds some shells and letters in bottles in the desert's sand and appears to the swimmer a gigantic "Mrs. Fata Morgana" or the mind has a "Dialogue" with the soul on marbled paper.

Only recently Fürstenhöfer went back to larger formats, but his preference still is the miniature painting. This simply corresponds to his nature, which is rather introverted. That is how the artist this passion, which demands patience and tact, describes. Therein lies also his strength, after all, he won several prizes in miniature art exhibitions in the U.S., where for visitors helpful magnifiers were made available.

Among them are artworks, which are fairy tale like - "The witch cooks poisoned food", "Moon-snails race"- as well as humour and irony, a sexy scarecrow in "Scarecrow Zensi’s solo strip" or "Arabic desert holder". Such titles and ideas describe Fürstenhöfer then as "Sunday-ideas", which fly to him.