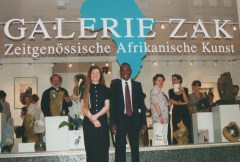 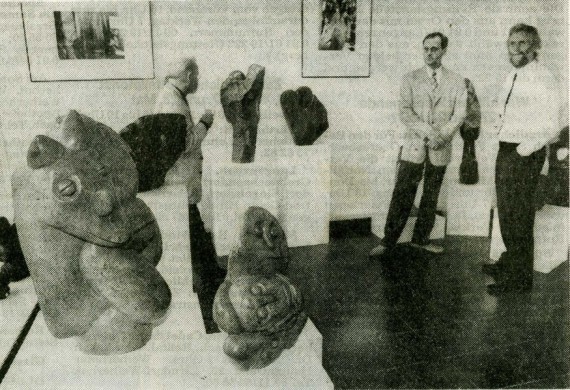 Fanizani Akuda was born in 1932 in Mteya near Chipata, Northern Rhodesia (now Zambia). Fanizani Akuda joined in 1967 the Tengenenge colony for stone sculpture, which was founded in Zimbabwe by Tom Blomefield in 1966. Next to Bernard Matemera, Henry Munyaradzi and Sylvester Mubavi he was soon declared by critics to be one of Tengenenge’s most prolific and well-known artists. In 1975 during the Independence War Fanizani Akuda left Tengenenge. Smiling figures, happy families, interaction between humans and animals often in pairs or groups and not forgetting "slit eyes", one of his distinguishing features, became his "trademark". Until his death in 2011 Fanizani Akuda lived and worked in Chitungwiza near Harare.

Richard Mteki was born in Harare in 1947, the brother of renowned first generation sculptor Boira Mteki, it was actually through his elder brother that Richard came to sculpt. Initially he enrolled at the Nyarutsetso Art Centre which had been established by the late Cannon Paterson and it was here he began to sculpt full time. Inspired by the work which was being produced at the Workshop School of the National Gallery, Mteki left the Nyarutsetso Art Centre and joined Frank McEwen and the group of sculptors at the National Gallery. When McEwen resigned in 1973, Mteki left the Workshop School and has worked independently since then.

A sculptor of some standing, Mteki's work has been acclaimed both locally and internationally. In 1986 Mteki was commissioned by the Zimbabwean Government to create a piece for the National Sports Stadium in Harare, a Zimbabwe bird. This is a massive piece which lightly rests on its huge base as if preparing to fly, all beak and powerful talons this is a bird of prey ready to claw its way through the sky. That was not the only time his work was chosen by the Government, in 1982 one of his pieces was selected as the gift to be presented to the Nigerian head of state by President Mugabe on his official visit to that country. In 1984 the Government once again selected Mteki's work, on this occasion the piece was presented to the late Rajiv Gandhi on the opening of the Non Aligned Movement summit in Harare.

Bernard Matemera (1946 – 2002)
Bernard Matemera was born in 1946 in Guruve, Rhodesia (now Zimbabwe) and died in 2002.
In 1963 Bernard Matemera was working as a contract tractor driver for tobacco farmers in Tengenenge and met Tom Blomefield, whose farm had extensive deposits of serpentine stone suitable for carving. By 1966, Tom Blomefield wanted to diversify the use of his land and welcomed new sculptors onto it to form a community of working artists. This was partly because at that time there were international sanctions against Rhodesia’s white government led by Ian Smith, who had declared Unilateral Declaration of Independence in 1965, and tobacco was no longer able to generate sufficient income. Bernard Matemera was one of the first artists to take up sculpting full-time, joining others including Henry Munyaradzi, Josia Manzi, Fanizani Akuda, Sylvester Mubavi and Lemon Moses, who formed part of what is now called the First Generation of Zimbabwean sculptors in hard stones.
Bernard Matemera stayed at Tengenenge throughout the war for Zimbabwean Independence at a time when many other artists abandoned their way of life. He became the symbolic leader of the community and from the 1980s gained worldwide recognition, with works included in exhibitions in the US, UK, Germany, The Netherlands and elsewhere.
Bernard Matemera sculpted mainly in grey or black serpentine, finishing his work to a uniform polished surface. His subjects were animals, people or fantasy spirit creatures.
Bernard Matemera has participated in major group exhibitions, including New African Art (1968), MOMA in New York and Chapungu: Custom and Legend – A Culture in Stone (2000), Kew Gardens in London.
Many of Bernard Matemera's exhibition pieces, such as Great Spirit Woman (Serpentine, 1982), have toured worldwide; for example to the Yorkshire Sculpture Park in 1990.
Bernard Matemera is represented in the permanent collections of the National Gallery of Zimbabwe, the Chapungu Sculpture Park, the Museum für Völkerkunde in Frankfurt and many others.

Nicholas Mukomberanwa was born in 1940 in the Buhera district near Ruwa, then Southern Rhodesia, today Zimbabwe and died 2002 Ruwa. He was an important representative of the first generation of modern sculptors in Zimbabwe.
Nicholas Mukomberanwa spent his childhood in a rural environment, which fundamentally influenced his later work. At the Serima Mission School he was introduced to the imagery of both the Christian religion and traditional African art, and he learned the art of wood carving. He was able to free himself from the restrictive, rigid artistic rules that were imposed on him there after meeting Frank McEwen, director of the National Gallery in Harare, in 1962. Its art pedagogical principles allowed young natural talents to develop freely on their own without too much guidance and training. In retrospect, this philosophy appears to McEwen as the most important element in Nicholas Mukomberanwa's career. While he was still working full-time as a police officer, he began to sculpt and soon his works appeared at international exhibitions. In 1976 he made sculpture his profession.

Henry Munyaradzi was born in 1931 in Guruve, North Zimbabwe and died in 1998 in Harare. He is a representative of the first generation of modern sculptors in Zimbabwe.
As the son of a ghost seer who left the family early, Munyaradzi lived as usual for rural Zimbabwe - his childhood and youth without education and worked as a shepherd and hunter with a bow and arrow. Among other things, he worked as a village blacksmith, carpenter and tobacco sorter and in many other professions until he happened to come to the Tengenenge artists' colony founded by tobacco grower Tom Blomefeld in 1967. It was there that he saw sculptors at work for the first time at the age of thirty-six. The idea of ​​the artist colony changed his life. He developed his sculptural mastery without knowledge of the stylistic work of Bernard Matemera and Josiah Manzi autodidactically and soon became one of the leading sculptors in Tengenge. At this time there was a revival of the stone carving tradition of Zimbabwe, also known as Shona art. As early as 1968 Munyaradzi's works were shown in the National Gallery in Harare; Exhibitions at the Musée Rodin in Paris and the New York Museum of Modern Art established its international reputation in the early 1970s. In 1975 he left Tengenenge in order to be able to develop his individual style further without being influenced. After a solo exhibition in London in 1984, he was able to buy his own farm in Ruwa, southeast of Harare. From 1985 until his death in 1998 he lived and worked there in close contact with nature. His peculiar and very simple style is so concise that it cannot be confused with any other Shona sculptor.

Lazarus Takawira born in 1952, in Nyanga in the eastern part of Zimbabwe, is the youngest of three sculpting brothers. His mother, Amai, was also a sculptor. Physically a massive man, his reputation is now as large as that of his deceased older brothers Bernard and the John. Of his inspiration he says: I only sculpt women. They are the most important sex because they are the source of all life, of all beauty, and of all joy for man. Women drive everything in our lives and as a sculptor, with every work I do I pay homage to the women in my life, who have made me what I am now.
Lazarus work is held in the permanent and overseas collections of the Zimbabwean National Gallery, as well as various public collections around the world, including the Musee du Rodin in Paris, The World Bank in New York, The Africa Museum in Belgium and the Museum of Bombay, India. At the Zimbabwe Heritage Exhibition during the Commonwealth Games 1990 he was presented to the Queen, whose heir, Prince Charles, has collected his work.
Celia Irving-Winter, art historian and critic, says of Lazarus work: Like his master counterparts, his brothers and Nicholas Mukomberwana, Lazarus Takawira has proved that stone sculpture made in Zimbabwe is not just the song which is sung to bring supper to the artist, but a real and finite expression of cultures within the sub region, which have both been subject to change and have recognisable and applied roots. Takawira talks about his African culture, the moveable feast which comprises his beliefs, his life experience, his historic consciousness and his sense of spiritual and familial ancestry. 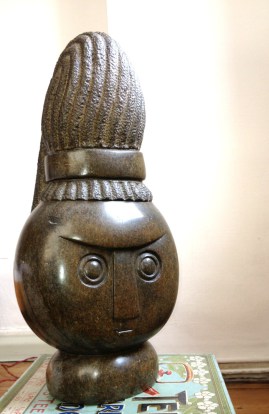