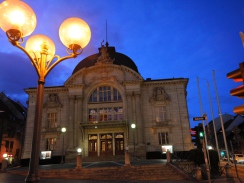 Stadttheater Fürth, built by the architects Fellner and Helmer 1901/1902 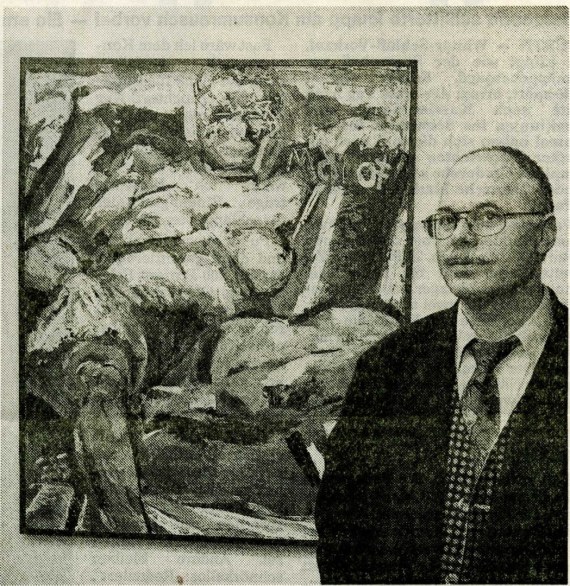 Sighard Gille, professional artist and professor of painting at the HGB in Leipzig, takes this leading trend further – namely with head, heart and stomach – in all its picturesque variety.

The exhibition, which was opened on Sunday in the Stadttheater stands again in the "sensual" context of the main topic of the theatre season - "womenfolk – menfolk". The joy and burden in the lust of both sexes are shown in the boldly and colourfully artworks by Sighard Gille.

The Siemens AG as main sponsor did significantly contribute to the realisation of the exhibition as it is part of the 100th anniversary of their Nuremberg branch.

At the beginning of this century Otto Dix, Max Beckmann and George Grosz revealed the abuse in urban areas. Grosz's pictures for example, back then were by the court in "very offensive" and "less offensive" divided and sexual themes convicted as obscene and pornographic. Where Grosz uses sexuality as means of cultural-political provocation, Sighard Gille shows in his "shameless" pictures sexuality as something quite natural in the human being: the animalistic instinct, the sheer carnality.

Gille’s witted fusion of sensuality and brutality are often at the limits of tolerability. Many of his pictures have an outrageous obscene effect and are vulgar, because of their honesty, as well as formally and technically shocking. This is precisely the intention of the artist: his paintings of the naked truth asking for critical analysis by the viewer.

The crudely applied pasty mass of the colour gives the painting the character of a relief. The painting looks like an affixed fat seal at the wall. The motif itself swells out of the colour matrix. The "Amazon woman" is wonderfully active in the glare of battle.

The yellow colour in "Animalistic act" seems like blows. An aggressive red stands beside a muddy earth tone. The abstracted bodies look like harvested fields, broken legs and arms. Thighs submerge into the nude body. "Despite sensuous depth, one can feel the critical reflection of the artist": Gille’s wife, who works as an art historian under the pseudonym I.G. Zet, refers in her laudation at the exhibition opening on the ambiguity of the word "conceive".

Similarly, one could see the pictures episode including the paintings “morning”, “midday”, “evening” where Gille has inset the rhythm of the day symbolical. The basic idea of the cycle was a terracotta figure in the shape of the fertility goddess. Each of the images is according to the colour principal connected with one of the three primary colours. An awakening and misdemeanours of the female, of the passion, of the senses…

The exhibition is complemented with a range of ink- and watercolour sketches that shows more the soft and intimate side of the artist.

Not least because of the much-centred composition of the paintings, the spectator can take undisturbed part at the happening. The representation of individuals Gille omitted. He coined a symbol for the sexes.

The artist sees painting as an alternative to the new media landscape. "Wonderful what is hardly feasible in life, what any computer denies this is possible in art, to say yes and no at the same time".