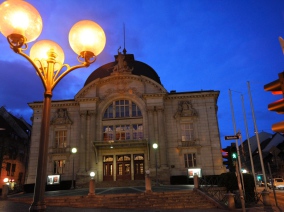 Stadttheater Fürth, built by the architects Fellner and Helmer 1901/1902. 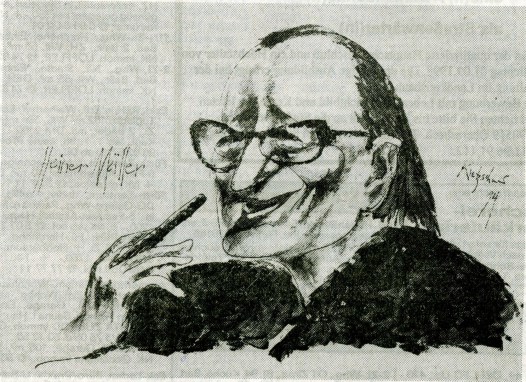 The playwright and theatre director Heiner Müller, who died in 1995, from the viewpoint of cartoonist Harald Kretzschmar. Photo: Winckler

If they could see themselves, all those theatre actors and - authors who are currently exhibited in the foyer of the Stadttheater as caricatures, they would certainly not always be enthusiastic. Some would smile, some would be thoughtful and perhaps some would offended turn away.

Maybe they have even seen themselves. After all has Harald Kretzschmar, who has designed these portraits with a deadly pen and acrylic paints, published four books with collected cartoons of personalities of political and cultural life. From 1958 to 1991 he made portraits of over 1300 celebrities for the satirical weekly magazine Eulenspiegel and exhibited them in international exhibitions to the curious, possibly mocking eyes of a large audience. The selections of poets and actors, which now can be viewed in the theatre lobby, were for this space exclusively selected by the Berlin-based cartoonists.

One encounters a Peter Handke with a green face, thin lips and narrowed eyes, a lordly-looking Max von Sydow with a red face, a Elizabethan proud-looking Elfriede Jelinek, a squinting Jean-Paul Sartre with lizard eyes and a Heinrich Böll who has given up all hope. Eugène Ionesco chatters with a rhinoceros while nonchalantly sitting in his desk chair, Christoph Schlingensief smiles crooked and boyish and is called - in ironic contrast to his reputation as the enfant terrible of German theater - "Darling".

Rolf Hochhuth stares tormented and tearful, Heiner Müller grinning anorexic and sensitive through his glasses, Bernhard Minetti is so bony, white and haggard that he looks like a friendly smiling skull. Federico Fellini wears a jacket full of greedy faces, a buxom nude on his shoulders.

The drastic exaggeration is in the nature of the cartoon. Kretzschmar, who only a few years ago began to use for colouring his pen and ink drawings acrylic paint, has a very precise and sensitive look into the specific characteristics of his "victims".

He analyses them and their issues like psychological study objects, sometimes he also discovers animal analogies.

Frog on the Lake

Martin Walser sits astride like a frog on the lake and hooking a tiny frolicking nymph. A bat-like Franz Kafka bears the full weight of his sinister scenarios on the shoulders, Klaus-Maria Brandauer with a cunningly grinning cat face sits at the table, Günter Grass transformed in a European flounder.

With all unsparing disclosure also of unsympathetic qualities, Kretzschmar's excellently drawn cartoons are never malicious, but simply accurate translations of typical facial features. Gestures and postures. Even if he disagrees with his opposite, he approaches him with respect.

When the 67-year-old describes his work, then is this also expressing his admiration for poets and philosophers, for literature and theatre makers: "I see them between the lines, these bold or hypersensitive, nonchalant or sceptic, trembling or daring figures. So I am creating a picture of them, as drastic as possible ... I study on them examples of creative excitement. I do not intend to use them as a warning. My interpretation is subject to change and is not binding. It is playing in earnest, a cheerful paraphrase about a temper. "

Highlights of the Hammond Collection 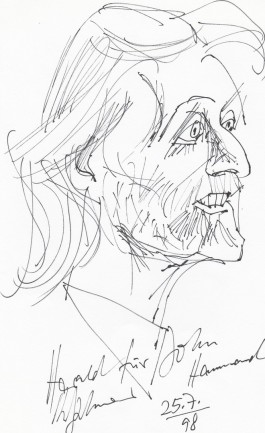