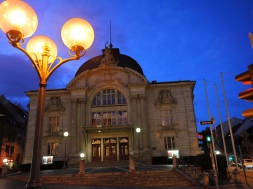 Stadttheater Fürth, built by the architects Fellner and Helmer 1901/1902

Scribbles from the world of monarchy 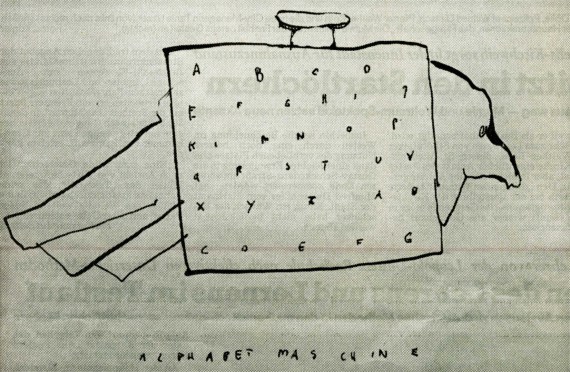 With contented facial expression wanders a gentleman along the bare wall, gazing expectantly at a drawing that hangs a few feet in front of him. Suddenly something pulls his attention. Puzzled he cranes his head up and sees that he has just clueless walked along a herd of sharks. A herd of wall sharks, of course. Those visiting until November the foyer of the Stadttheater will have to pay a smile or a hearty laugh as toll. One of the large-format screen prints with the title "Grasses of the province" shows quite succinctly what is there in the province: a few blades of grass and nothing else.

The subtle humour of the drawings and installations by the set designer and graphic artist Peter Engel has much to do with their simplicity: a few quick sketched lines here, a patch of colour there, scribbles by pencil - and fat people, which are sympathetic, with their dishevelled appearance. Engel pays particular attention to faces. They also are what he often sketches at first with a few lines on the paper, without prefab idea. "I use, what are available, pencil, ink or poster colours and somehow I am beginning", says the artist.

The "hastily, scribbled and fragmentary" is characteristic for Engel, even Thomas Reher said in his introduction at the opening on Sunday. The humour that meets the viewer at every turn is of profound humanity. For example, shows the drawing "Big stones in the world of monarchy" on the left a couple of stone blocks put side by side on the right a couple of serious-looking heads. The similarity of the two halves of the picture stirs the question about who is who: stone head or head stone.

Often is in the lower part of the picture a line, which hastily scribbled with a pen looks as if it was made by a child. These "explanations" bring an additional component of ambiguity, distraction and confusion into the game. That Engel actually is working for the theatre is shown in many of his drawings and cartoons. "Here meet picture and stage", said Reher. The gesture of showing has priority, but whereas the drawn figures are never made to look silly and never hold up to be ridiculed.

That is, why the exhibition also fits to the concept of the new season at the theatre under the theme "Heroes and Fools": the secret of comedy - the Fool as the real hero - also surrounds the drawings by the artist. Ironically wink instead of cynicism. Humour without malice. Really snappy it is only in the right wing of the foyer, where the wall sharks are. A tip for visitors: you are swimming towards the exit!

born 1969 in Arzberg, Upper Franconia
1991 - 95 studies at the Academy of Fine Arts in Nuremberg
since freelance work as stage designer and illustrator
1995 Cultural Award of the City of Coburg
1998 Debutant Funding of the Bavarian Ministry of Culture
1999 A-Paul-Weber Award of the A. Paul Weber Museum Ratzeburg for "Caricature and Critical Graphics"
2008 Art Prize of the Kunst- und Gewerbeverein Regensburg
2009 E-on Culture Award Bavaria
2009 Culture Prize of the City of Regensburg
Peter Engel lives and works in Regensburg 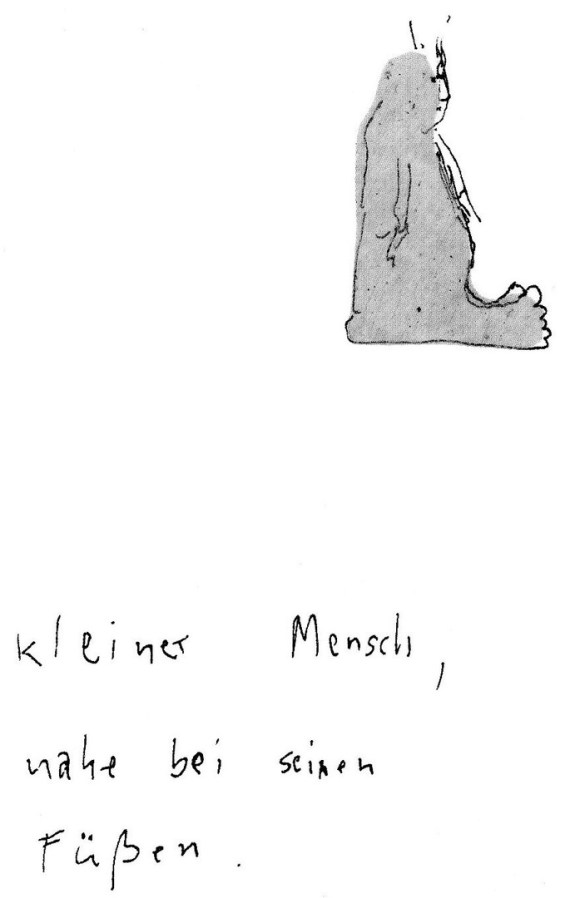 A present from Peter Engel to J. & R. Hammond on the occasion of his solo exhibition at the Stadttheater Fürth in 1999.